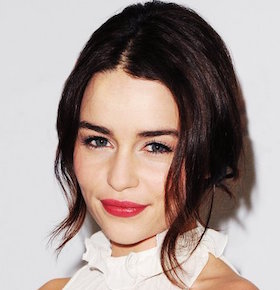 Celebrity Speaker Emilia Clarke discovered her passion for drama at an early age, but began her professional acting career in 2009. Her rise to stardom came very quickly. When Emilia signed her five-year contract for Game of Thrones, her acting career only consisted of a walk-on role in Doctors and television movie Triassic Attack.

While Emilia was attending Drama Centre London, she was very active in the theatre. During this time, she was cast for her first television appearance with a guest role in BBC Drama Production, Doctors. After graduating, Emilia got her first film role as Savannah in the horror movie Triassic Attack in 2010.

Emilia made her first major breakthrough in 2011 with her role as Daenerys Targaryen in the epic HBO hit series Game of Thrones. The series is based off the book A Song of Ice and Fire by George R. Martin and is a fantasy drama that chronicles the intense brawls between the realm’s noble families in order to gain control of the Iron Throne. Within a year of landing the part, she received an Emmy for Best Supporting Actress in a Drama and was nominated for Outstanding Supporting Actress in a Drama at the 65th Primetime Emmy Awards.

In 2013, she starred as the lead role of Holly Golightly in the Broadway production Breakfast at Tiffany’s. Most recently, she was cast in the upcoming film Terminator: Genesis alongside Arnold Schwarzenegger in 2015.

Emilia has been popular to the public eye since she made her acting debut. She has been featured in major magazine publications such as Vogue, Marie Claire, InStyle, Vanity Fair and Rolling Stone, only to name a few. In 2012, she topped the chart on the Independent Critics List of the 100 Most Beautiful Faces of 2012 and in 2014 she ranked 1 on Askmen’s list of 99 Most Desirable Famous Women.

With her beauty, effervescent personality and her exceptional acting skills, it is safe to say that this is only just beginning of Celebrity Speaker Emilia Clarke’s career.