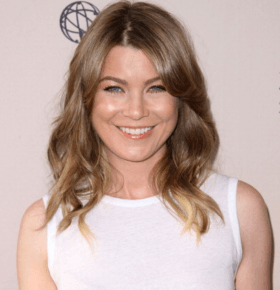 Celebrity Speaker Ellen Pompeo is an award-winning actress and celebrity mother of 2 best recognized for her role as Meredith Grey in the popular ABC medical drama series Grey’s Anatomy. The TV series first premiered in 2005 and in later seasons carried the title as the highest-rated TV drama in the key 18-49 year old demographic. As the show’s leading lady, Celebrity Speaker Ellen Pompeo has certainly left her mark on TV history after 12 incredible seasons and counting. In 2015, Ellen made a cameo appearance in Taylor Swift’s music video for her hit single, Bad Blood.

Celebrity Speaker Ellen Pompeo had several guest roles on TV series such as Law & Order and Friends before appearing in her first featured film in 1999 called Coming Soon also starring Ryan Reynolds and Ashton Kutcher. In 2003, Ellen landed more prominent roles in the crime drama Catch Me If You Can and the comedy film Old School starring Luke Wilson and Will Ferrell. She also starred as Karen Page in the Marvel Entertainment film Daredevil. Her career found legs in 2005 when she landed the iconic role of Meredith Grey.

In 2007, Ellen was nominated for the Golden Globe Award for Best Performance by an Actress in a Television Series – Drama and won the Satellite Award for Best Actress – Drama Series. Most recently in 2015, Ellen was awarded the People’s Choice Award for Favorite Dramatic TV Actress. While she is proud of her achievements as an actress, Celebrity Speaker Ellen Pompeo doesn’t let them define her. She finds joy and empowerment in being a loving wife and mother to her family and wants to explore other areas of the entertainment industry such as producing.