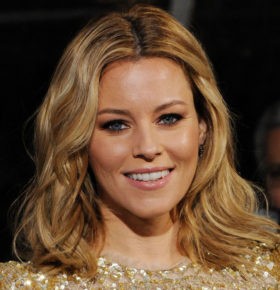 Celebrity speaker Elizabeth Banks is a talented actress who has enjoyed a successful career on TV and in major motion pictures. Many may recognize her from her most recent movie role as the eccentric Effie Trinket in The Hunger Games. A mother to 2 boys, Elizabeth received the 2014 March of Dimes Grace Kelly Award as a role-model celebrity parent in the Hollywood community.

Elizabeth began her acting career with small roles in TV and film which included roles in Sex and the City, Law and Order: SVU, and Without A Trace. Other notable TV roles include Dr. Kim Briggs on the beloved TV series Scrubs for 3 seasons as well as Avery Jessup on NBC’s Emmy Award winning series 30 Rock. Several mid-level movie roles lead to a part in the movie Seabiscuit, which was nominated for a Screen Actors Guild Award for Best Performance by a Cast in a Motion Picture. At the Young Hollywood Awards that year in 2003, Elizabeth won the Exciting New Face Award which garnered a number of new exciting acting opportunities for the talented actress.

Elizabeth played well-known roles in The 40-Year-Old Virgin, Invincible, and Definitely Maybe before landed her first official lead role in Zack and Miri Make a Porno. Elizabeth was able to showcase her comedic side in the film and further exemplified her versatility as an actress. Some of Elizabeth’s recent popular films include Our Idiot Brother, Man on a Ledge, What to Expect When You’re Expecting, Pitch Perfect, Frank or Francis and People Like Us. Celebrity speaker Elizabeth has also become a director, making her feature directorial debut with Pitch Perfect 2 in 2015. She not only directed the movie but also produced it and starred in the sequel as Gail once again.

Aside from countless appearances in publications such as Cosmopolitan, Self, and Allure magazines, Elizabeth has been featured on the cover of Women’s Health magazine a whopping 4 times! Not only is she a role model for mothers, but Elizabeth and her health tips and tricks continue to encourage women to take care of themselves and feel comfortable in their own skin.