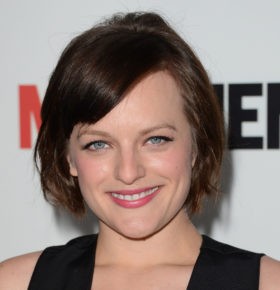 Celebrity Speaker Elisabeth Moss is an actress best known for her role as Peggy Olsen in the hit drama series, Mad Men. AMC’s 1960’s period drama came to an end after 7 seasons with the highly anticipated series finale airing in May of 2015. The critically acclaimed show received an extensive list of Emmy and Golden Globes awards, including the Emmy Award for Outstanding Drama Series in the show’s first 4 seasons. Elisabeth’s latest project is her starring role in the film High-Rise alongside fellow cast mates Tom Hiddleston, Jeremy Irons, Luke Evans, and Sienna Miller.

Elisabeth began her acting career at a young age, making minor film and television appearances until she began to make serious headway in her career with a supporting role in the film Girl, Interrupted alongside Angelina Jolie as well as regularly appearing on the NBC political drama, The West Wing as president’s daughter Zoey Bartlet from 1999-2006.

On top of her role in Mad Men, Celebrity Speaker Elisabeth Moss made her Broadway debut in 2008 when she appeared in the 20th Anniversary revival of Speed-the-Plow. She also starred in the 2007 horror film, The Attic, as well as a 2010 appearance alongside stars Jonah Hill and Russell Brand in the big screen comedy Get Him to the Greek. In 2013, Elisabeth starred as detective Robin Griffin in the Sundance Channel miniseries Top of the Lake. Her performance in the miniseries received critical acclaim as she won the Golden Globe Award for Best Actress in a Miniseries of Television Film and also the Critics’ Choice Television Award for Best Movie/Miniseries Actress.

In addition to her acting, Elisabeth is an avid supporter of St. Jude’s Children’s Hospital and can often be found attending charity dinners such as the National Corporate Theatre Fund Chairman’s Award Gala.

Celebrity Speaker Elisabeth Moss is a talented actress who has garnered new opportunities with her pivotal role in Mad Men.