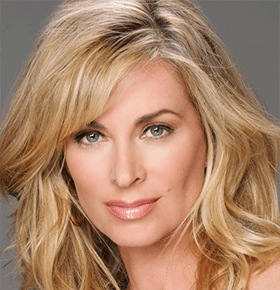 During this time, Davidson also co-wrote her first novel with author Robert J. Randisi. The novel was a mystery entitled Death in Daytime, which she followed up with three sequels: Dial Emmy for Murder, Diva Las Vegas, and Swinging in the Rain. In addition to soap operas, Davidson has starred in various films such as The House on Sorority Row and Easy Wheels. She can also be seen gracing the covers of Allure, Good Housekeeping, and InStyle magazines. However, Eileen’s next project journeys into uncharted territory with reality TV, joining the Real Housewives of Beverly Hills cast. She is set to debut in the hit Bravo show as series regular in 2014.

Outisde of her acting and writing, Celebrity Speaker Eileen Davidson is married to former pro tennis player and soap opera actor Vince Van Patten, and the two have one child together. Additionally, the actress fills her free time surfing, skiing, painting and scuba diving. Davidson also works with the organization Para Los Niños, which helps support inner city children in Los Angeles, and serves as a spokesperson for NuBrilliance Microdermabrasion Skin Care System.