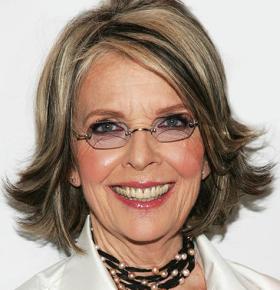 Legendary actress, director, producer, and Celebrity Speaker Diane Keaton has been featured in over fifty motion pictures since she got her start in the movie making business over forty years ago when she starred in her first big-time film, The Godfather. Following that performance, Keaton was cast in several films by the world-renowned actor, director, screenwriter, and playwright Woody Allen including Play It Again, Sam, Sleeper, Love and Death, and Annie Hall, for which she won the Academy Award for Best Actress in a Leading Role and her first Golden Globe Award for Best Motion Picture Actress in a Musical or Comedy. In 2014, Diane accepted the Cecil B. DeMille award on Woody Allen’s behalf. That year, she also became the first woman to receive the Golden Lion Award from the Zurich Film Festival. She has announced recently that she will provide her voice for the character of Dory’s mother in Finding Dory, the sequel to the mega-hit, Finding Nemo.

Celebrity Speaker Diane Keaton is known for her non-Woody Allen films as well, including Reds, Marvin’s Room, Baby Boom, Father of the Bride which also starred comedic actors Steve Martin, Martin Short and actress Kimberly Williams, and The First Wives Club where she joined fellow lead actresses Goldie Hawn and Bette Midler. In 2004, Diane Keaton won her second Golden Globe Award for Best Performance by an Actress in a Motion Picture for her role in the romantic comedy Something’s Gotta Give in which she plays the lead character alongside actors Jack Nicholson, Keanu Reeves, and Amanda Peet. In 2005 Keaton starred in the popular holiday movie, The Family Stone, alongside famous actors Luke Wilson, Claire Danes, Rachel McAdams, Sarah Jessica Parker, Craig T. Nelson, and Dermot Mulroney.

Among her many talents, Diane Keaton is also a real estate developer, photographer and author. In 2012 she released her memoir entitled Then Again, as well as Diane Keaton: House, a book about architecture and interiors.