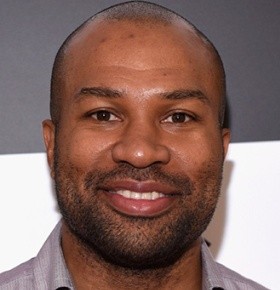 Celebrity sports speaker Derek Fisher served as the head coach for the New York Knicks and previously played in the NBA for 18 years. He is one of the most respected people in the league, he puts family first, and attributes his basketball ability and talent to his Christian faith.

The basketball leader broke records while playing at his alma mater, the University of Arkansas at Little Rock, and thus was honored as the Sunbelt Conference Player of the Year. The Los Angeles Lakers drafted Fisher in the first round of the 1996 NBA Draft as the 24th overall pick. While playing for the Lakers, he won five Championships under then-head coach Phil Jackson. The NBA veteran’s accomplishments don’t stop there. He is the all-time NBA record holder for the number of playoff games played, and when he retired as a player he ranked third in three-point field goals in the Finals.  He is also known for making clutch plays when the game is on the line. One of these plays is the NBA’s 18th-greatest playoff moment of all time, in which Fisher drained a basket with 0.4 seconds left in the game to defeat the San Antonio Spurs in the 2004 Western Conference Semifinals. His big-time moments under pressure have also extended off the court when he was the president of the NBA Players Association during the challenging 2011 NBA lockout. Starting in the 2014-2015 season, Fisher will further demonstrate his renowned leadership skills from the sidelines as the Knicks’ head coach. Phil Jackson and Fisher are able to work together on the same team again due to Jackson being the president of the Knicks.

The floor general is also the author of the book Character Driven: Life, Lessons, and Basketball. He has had an endorsement deal with Nike and the FRS Healthy Energy Drink, and currently has a deal with Adidas. Derek was recently presented with an honorary Doctor of Liberal Arts degree by UALR Chancellor Dr. Joel E. Anderson, who called Coach Fisher the school’s “most famous alum.” The celebrity sports speaker also gave a commencement speech to the 2015 graduates.