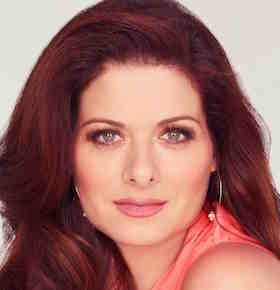 The television world’s favorite funny girl, Celebrity Speaker Debra Messing, didn’t actually begin her acting career on screen as the lovable Grace Adler in Will and Grace. Instead, she performed in front of a live audience for the 1993 pre-Broadway workshop production Angels in America: Perestroika. After gaining praise for her role in the play, she graced the award-winning ABC television show NYPD Blue from 1994 to 1995 as the character Dana Abandando. Debra’s ABC television debut eventually landed her a role in in the 1995 film A Walk in the Clouds, where she worked alongside Keanu Reeves as his character’s unfaithful wife.

As her career progressed, she made guest appearances in shows such as Seinfeld in 1996 and 1997, as well as in Donald Margulie’s production Collected Stories, a two-character play that premiered at the Off Broadway Manhattan Theater Club. While working for the ABC show Prey in 1998, Debra secured the role of Grace Adler in the show Will and Grace. As the star of the hit sitcom, she won a 2001 TV Guide Award for Actress of the Year in a Comedy Series and an Emmy for Outstanding Lead Actress in a Comedy Series, in addition to numerous other honors. Loved by critics and fans alike, she was also named in People magazine’s 50 Most Beautiful People in the World, as well as TV Guide magazine’s 2003 Best Dressed Woman.

While continuing her work on Will and Grace, Debra appeared in Woody Allen’s 2002 film Hollywood Ending, as well as other films such as Along Came Polly and The Wedding Date. In 2005, Debra received the Women in Film Lucy Award for her contribution to the television industry as a character that embodies both an honorable and relatable female role.

After the finale of Will and Grace in 2006, Debra took on the role of Molly Kagan in the 2007 television mini-series The Starter Wife. The successful show was nominated for ten Emmy awards, including an individual nomination for Debra as an Outstanding Lead Actress in a Miniseries or Movie. In addition to an Emmy nomination, Debra also received the Gracie Allen Award, as well as a Golden Globe nomination and Screen Actors Gild Award for Outstanding Actress in a Miniseries or Movie. Despite her movement into more serious roles though, Debra continued to make people laugh, as evidenced by her number 22 ranking on the 2011 TV Guide Network Special Funniest Women on TV.

Returning to the film industry, Debra stars in Frank Whaley’s 2014 movie Like Sunday, Like Rain alongside Billie Joe Armstrong and Leighton Meester. Coming full circle, Debra also returned to the theater in 2014 to star in the Broadway play Outside Mullingar, which was nominated for a Tony award for Best Play. Debra’s latest work is with The Mysteries of Laura which is a police procedural comedy-drama on NBC. As a voice on the stage, in television, and on film, Debra is a versatile celebrity with an innate talent for speaking.