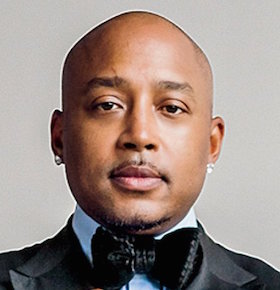 Business Speaker for hire Daymond John is one of the premier businessmen of the current generation, doing so with business savvy and swagger. Daymond has become more than just a business tycoon, as he’s become a pop culture icon. John is the founder of the renowned fashion brand FUBU and stars on the world wide hit ABC Show Shark Tank, helping fund entrepreneurs’ ideas, along with moguls Mark Cuban and Kevin O’Leary. In addition, John is a New York Times best-selling author for his 2016 book, The Power of Broke.

In 2017 John launched the creative co-working space, blueprint+co. His think tank initiative looks to educate and empower by building a community of like-minded entrepreneurs working together. In 2015, he was named a presidential ambassador for Global Entrepreneurship and even joined President Obama at the Global Entrepreneur Summit in Kenya, and with him on his historic trip to Cuba in March 2016.

Before his widespread success, John grew up in Queens, NY which served as the launch point for his profitable career.  The start of his clothing empire FUBU began in the early 1990’s when he first starting selling his own clothes.  Expansion occurred when he started sewing the FUBU logo on a variety of products including jerseys, t-shirts and sweatshirts.  During this period Daymond was concurrently working at Red Lobster to support him and the business.

FUBU became a household name in the mid 1990’s under the tag line “For us, By us.”  LL Cool J, a childhood friend, was an active promoter of the company and incorporated the slogan into his rapping.  John continued to grow the brand into apparel giant through contracts with Macy’s, J.C. Penney and the National Basketball Association on it’s way to $350 Million in revenues in 1998.  Worldwide the brand has reported sales of over $6 Billion.

Aside from his work as a businessman, Daymond has made a name for himself as a public speaker.  As a motivational speaker, John highlights his journey from rags-to-riches and into one of the most successful businessmen in America.  Currently he serves as a consultant to multiple high profile clients assisting them with additional revenue streams and brand extensions. In addition to his best seller The Power of Broke, he’s also the author of the books Display of Power and The Brand Within.