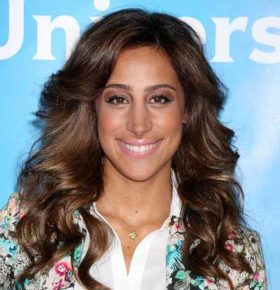 Danielle Jonas, formerly Danielle Deleasa, is a reality TV star and wife of the popular singer Kevin Jonas of the Jonas Brothers. The couple recently celebrated the birth of their first child, a baby girl, in February of 2014. The couple’s reality documentary TV series on E! Network entitled Married to Jonas follows the couple in their first few years of marriage and the journey of Kevin and his brothers Nick and to the top of the music industry. The show, produced by Ryan Seacrest, has spanned 16 episodes over 2 seasons and in 2013 both Danielle and the show were nominated for favorite Female Reality Star and favorite Reality Show.

Reality TV Speaker Danielle was a hairdresser before she met Kevin Jonas in the Bahamas while vacationing with her family in 2007. The Jonas family was also vacationing in the Bahamas at the time and the two began dating a few months later while keeping their relationship hidden from the mainstream media. In 2009, Kevin left his brothers and the band after a tour stop in Canada and took a red-eye flight home to New Jersey to propose to Danielle who delightedly obliged. The two were married in an elaborate wedding in December of 2009 at the Oheka Castle, the 2nd largest privately owned home in the United States.

Since her marriage to the Jonas brother, Reality TV Speaker Danielle has made several appearances with her husband on various red carpet events as well as VH1 Morning Drive and the Rachael Ray Show. The couple discussed favorite family recipes, the birth of their upcoming child and learned how to prepare their dogs for the new baby. At the end of the 2nd season of Married to Jonas Danielle also got the opportunity to do a cooking column with Cosmopolitan magazine that featured a photo shoot in Danielle and Kevin’s home kitchen.