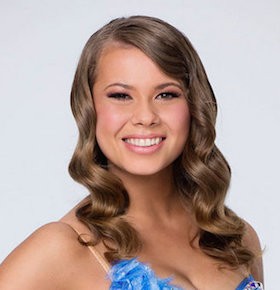 Celebrity Speaker Bindi Irwin is a beloved actress, TV personality and wildlife conservationist. She is the daughter of the late wildlife conservationist and TV star Steve Irwin whose documentary series The Crocodile Hunter was a huge hit worldwide during the late 90’s and early 2000’s. Bindi began appearing in her father’s documentaries as early as 2 years old and began hosting her own wildlife documentary series on Discovery Kids called Bindi the Jungle Girl at the age of 9. In the fall of 2015, Celebrity Speaker Bindi Irwin was chosen to compete as a celebrity contestant on season 21 of the popular ABC dance competition series Dancing with the Stars.

Bindi vowed to carry on her late father’s legacy as a popular TV personality and wildlife conservationist following his tragic and unexpected death in 2006. She wrote and delivered a heartfelt eulogy at her father’s funeral in front of a crowd of over 5,000 people and 300 million viewers on TV. Even at a young age, Bindi understood the gravity of her father’s life work and the love and respect he had garnered from the public and his colleagues. His life’s work inspired her to carry on the family legacy to positively impact others as a Celebrity Speaker and TV personality.

In 2007, Celebrity Speaker Bindi Irwin hosted a TV special called My Daddy the Crocodile Hunter on Animal Planet. The special was a tribute to her father’s life and career as well as an in-depth look at her own work as a wildlife conservationist. That year she also made appearances on a number of popular daytime and late night talk shows including The Ellen DeGeneres Show, The Today Show and Late Show with David Letterman. She also presented the award for Favorite Male Singer at the 2007 Kids’ Choice Awards.

Bindi has created a number of different projects during her young career including her own fitness DVD for kids called Bindi Kidfitness. In 2008, Bindi won an Emmy Award for Outstanding Performer in a Children’s Series becoming the youngest TV personality ever to win a Daytime Emmy Award. She also remains heavily involved in her family’s charity, Wildlife Warriors. In 2012, she introduced a wildlife-themed game show called Bindi’s Bootcamp which was filmed at the Australia Zoo.