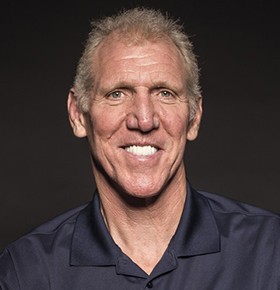 Standing at a towering 6’11, it’s hard to miss former NBA legend Bill Walton. Sports Speaker Bill was a part of the NCAA record-setting UCLA team that contributed to an 88 game win streak and 2 consecutive NCAA titles. He would go on to be an equally impressive star in the NBA and followed his legendary career as a player with a success stint as a basketball analyst for ESPN and the Pac-12 Network.

Bill was a standout star at UCLA under one of the greatest basketball coaches in the history of the game the late John Wooden. Bill would help lead the team to back-to-back NCAA titles in 1972 and 1973 in which the team would go 60-0 and contribute to the UCLA’s NCAA record 88 consecutive wins. The 3-time NCAA Player of the Year broke into the NBA with the Portland Trail Blazers under esteemed coach Jack Ramsay after being the #1 pick in the 1794 NBA Draft. Bill had an immediate impact on the league and won his first NBA championship with the team in 1977. He would go on to play for the Los Angeles Clippers and the Boston Celtics over his career from 1974-1987 and won a 2nd NBA title in 1977 with the Celtics. After son Luke’s back-to-back championship seasons with the Lakers in 2009 and 2010, Bill and Luke became the first father-son pair in NBA history to win multiple championships.

Sports Speaker Bill Walton overcame a speech impediment post-playing career and began color commentating NBA games for NBC and the Los Angeles Clippers from 1990-2002. It was then that he would join the staff at ABC and ESPN until the need for back surgery forced him to step away from the broadcast table for a several years before returning in 2012. He is a well-known Grateful Dead supporter and hosts his own satellite radio show One More Saturday Night which broadcasts on the Grateful Dead Sirius Satellite Radio channel . He has appeared in TV advertisements for Capitol One, Guinness, and Reebok and owns his own business accelerating organization called Connect SD Sports Innovators.