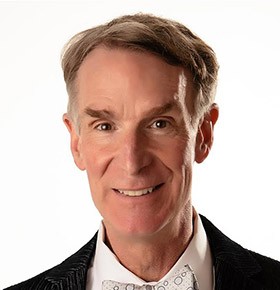 Science guru, TV star and Celebrity Speaker Bill Nye has been affectionately known as Bill Nye the Science Guy since his hit PBS and Disney science shows for kids first became a hit in the early 90’s. He has made many appearances on TV since his series as a science educator including acting spots for Disney. Bill was also featured in season 17 of the ABC hit dance show Dancing with the Stars, partnered with Tyne Stecklein.

Celebrity Speaker Bill Nye began his career as a mechanical engineer for Boeing and was responsible for developing a suppressor that is still used today in Boeing 747 airplanes. Before starring in his own show on PBS, Television Star Speaker Bill was Dr. Brown’s assistant in the TV series Back to the Future: The Animated Series for 2 years. From 1993-1998, his show Bill Nye the Science Guy tackled particular science topics that were easy to understand for kids and also quite comedic at times. His science show of the same name was also featured by Disney and earned Bill 7 Emmy Awards for Outstanding Performer and Outstanding Writer in a Children’s Series from 1994-1999. After his science programs, Bill was featured in other TV shows such as BattleBots, his own Discovery series called Greatest Inventions with Bill Nye, and talk shows such as Larry King Live and CNN programs.

Outside of Bill’s TV appearances, he has contributed inventions and creations for the betterment of our world. He is responsible for helping develop the MarsDial, a sundial that helps tell time that was utilized in the Mars Exploration Rover Missions. He even held a 5-year stint as vice president of The Planetary Society advocating for space science research and space exploration. Bill continues to make multiple appearances doing keynote speeches for colleges as well as at science conferences and celebrity events.