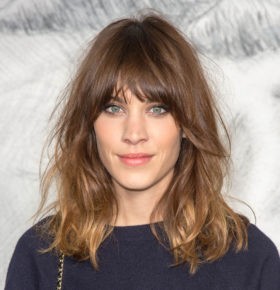 She also hosted a show called Frock Me on with English fashion designer, blogger, and businessman Henry Holland. Most recently, Chung joined Queer Eye’s Tan France to co-host a Netflix series called Next in Fashion. For her television roles, Alexa Chung has received many awards including Glamour magazine’s award for Best TV Presenter. She was also honored with the Elle Style Award for Best TV Presenter.

For her personal style, Chung is often recognized by fashion magazine’s best-dressed lists. She has received the British Style Award from the British Fashion Awards for three consecutive years. She also frequently appears modeling in magazines such as Elle, Vogue, and Harper’s Bazaar. The fashion industry expert was even described as a phenomenon by Vogue’s editor-in-chief, Anna Wintour.

Additionally, Chung designs her own line of clothing under the label Alexa Chung. The brand launched in 2017 and can be found on Net-A-Porter, Matches Fashion, and MyTheresa. The brand has also partnered with Rent The Runway.

Also a fashion journalist, Alexa Chung has written for England’s newspaper, The Independent. Her weekly columns for the newspaper were called Girl About Town and New York Doll. She also contributed a monthly column for Company, a British women’s magazine. She has worked for British Vogue as the contributing editor since 2009, hosting interviews with prestigious designers like Christopher Kane.

Chung also has her own newsletter where she discusses all things style, art, business, and pop culture. Most recently, Chung celebrated International Women’s Day by partnering with the World Endometriosis

Chung is an excellent inspirational speaker for hire, as she appeals to aspiring young women and female entrepreneurs. If you would like to book Alexa Chung for your next event, please reach to an agent at booking@celebrityspeakersbureau.com.