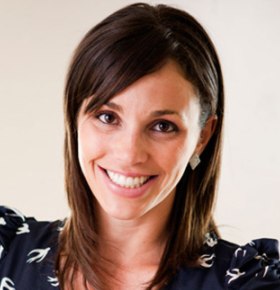 Celebrity Chef Speaker Aida Mollenkamp is a chef, cookbook author, writer, and television personality who holds a degree in hospitality management from Cornell University and a Grand Diplome from Le Cordon Bleu in Paris.

Growing up in a multicultural family, Celebrity Chef Speaker Aida learned a lot about good food from her Italian American mother and French stepmother, both of which inspired her passion for cooking. After receiving her culinary degree in France, Chef Mollenkamp moved back to the United States and continued her training in kitchens of restaurants such as California Pizza Kichen, Chez Melange, and Hotel Bel-Air in Los Angeles. In 2005 Aida discovered her interest in writing about food and became an editor for CHOW.com, a website targeted toward food and drink enthusiasts in the San Francisco area. She continued her career as a food writer and in 2012, released her first cookbook, Aida Mollenkamp’s Keys to the Kitchen: The Essential Reference for Becoming a More Accomplished, Adventurous Cook, which contains 300 plus recipes along with helpful tips and techniques for the average home cook.

Chef Aida Mollenkamp didn’t stay behind the scenes as Food Editor for long. In 2008 her first cooking show, Ask Aida, premiered on The Food Network, receiving much positive reaction from her viewers. Ask Aida was not only a cooking show but an interactive series where viewers were able to submit questions to Chef Mollenkamp directly. The series was a great success and ran for three seasons. Mollenkamp also hosted a second series following Ask Aida called FoodCrafters where she traveled around the nation looking for handmade foods. Her second series aired on the Cooking Channel for two seasons. In 2010, Chef Aida appeared on Food Network Challenge: All-Star Grill-Off in with fellow celebrity chefs Sunny Anderson, Melissa d’Arabian, Iron Chef Michael Symon, Adam Gertler, and Aaron McCargo.